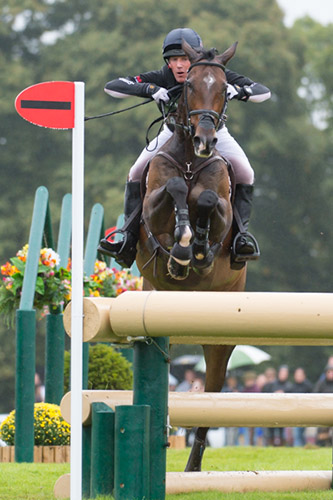 It was a bit of a mixed week for Oliver at Burghley. With three horses to ride it was always going to be busy.

Dromgurrihy Blue had the disadvantage of Thursday morning dressage marking and his cross country didn’t really go to plan. Oliver felt that the horse wasn’t travelling as well as he might, but credited him with being very genuine and ‘throwing himself at whatever I pointed him at.’ He was perhaps a little tired on the final day, and rails down dropped him down the order.

MHS King Joules, who Oliver believes is a real star of the future, did a good dressage test to lie in 5th place going in to the cross country. He was very exuberant and taking on the course well until this exuberance resulted in a missed line to the final element of Discovery Valley. An almost inevitable run out followed and Oliver retired, saving him for another day.

Samuel Thomas, who made his 4* debut at Burghley last year, had not wanted to play ball in the dressage arena and was languishing down in 42nd place after the first phase. However a fast cross country clear rocketed him up the order, and he jumped one of just five show jumping clears (there were only two double clears: cross country & show jumping) to finish best of the Brits in 7th place.