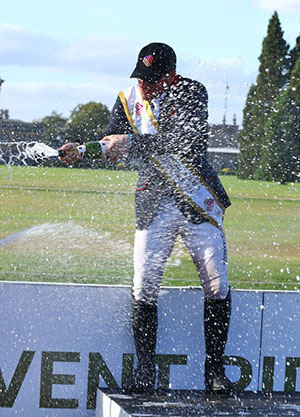 Cillnabradden Evo yet again gave Oliver a fabulous result at Blenheim. He didn’t quite manage to make it three back-to-back ERM wins, but he did finish in the runner up spot, which was good enough to put Oliver at the top of the series leaderboard when it mattered most – the £30,000 series top prize was his. Even better, Oliver’s total winnings in the ERM come in at a healthy £74,000.

A rare double clear, with just 0.8 cross country time penalties moved the pair up from 10th after dressage – Cillnabradden Evo hasn’t had a rail down in two seasons.

Cooley SRS finished 5th in the 8/9yo CIC3*, his placing hampered by 12 jumping penalties  – he did, however, jump clear inside the time across country.

Dunbeau also added 12 penalties to his score in the show jumping, but a fast cross country, close to the optimum, moved him up to 9th in the CCI3*, up 6 places from his dressage ranking.