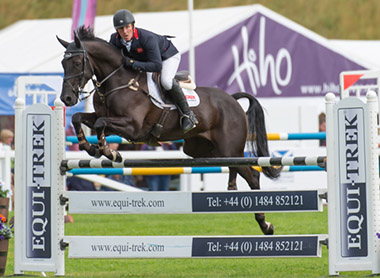 It was a really busy week for Oliver, with seven horses competing at Blair and two of his  Burghley rides coming along for a bit of schooling ahead of next week.

Oliver bagged the 53rd win of his career when winning the ERM CIC3* on Cillnabradden – the horse on which he also won the last leg at Gatcombe. It was nail-bitingly close as Oliver set off across country, but he was fortunate to be galloping past a loudspeaker just as 2nd placed Bettina Hoy had a run out.

“I backed off going up the hill knowing I could afford to give him a breather. It shows how quick he is, even backing off he only had 2.4 time penalties.”

Oliver came close to winning the CCI3* too, but had to settle for 2nd and 3rd places on ODT Ghareeb and Lanfranco respectively

In the Scottish Open Championship CIC3* Dunbeau took the runner up spot after adding just 0.4 of a time penalty across country, while Fernhill Ultimate slotted in to 6th place, also clear but slightly steadier than his stablemate.

Both of Oliver’s rides in the well subscribed CCI1* finished in the top 10, and both on their first phase scores. Gortglas Crazy Love took 4th place and Shearwater Sportsfield 6th – a really consistent performance.