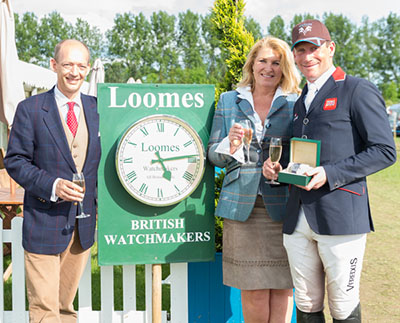 Oliver became the first British winner of the Loomes Championship at Rockingham, for the open intermediate or advanced rider who finishes closest to, but inside, the optimum time across country. The prize is a handmade English watch from Robert Loomes & Co of Stamford, worth around £8,000.

With four entered in the OI and one in the AI Oliver had set out to win the prize. A steady round on MHS King Joules provided useful information, and with Ballaghmor Class – who finished 3rd in the section – he was one second over. When Coldplay III came home one second inside, winning the class in the process, Oliver withdrew both Cooley SRS and Cooley Master Class who have other plans in store.

Cooley Master Class was on a 19.9 dressage score, and now heads to Tattersalls, while Cooley SRS is entered for Houghton.

Kroongraaf Hallo was the best of the novice runners, finishing with a 5th place.