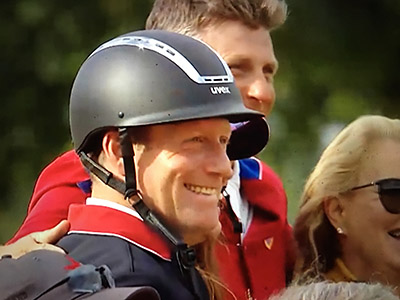 Oliver had a great trip to Maryland for its inaugural CCI5*-L. A fabulous dressage performance put Cooley Master Class on a score of 21.1, a new international personal best for the horse, and it gave them the lead at the end of the dressage phase.

Whilst it wasn’t the sort of cross country course Cooley Master Class would normally favour, with very challenging terrain, he pulled out all the stops to come home five seconds inside the time and retain his lead.

Unfortunately it was not Oliver’s day on the Sunday and he touched fence four – only his fourth jumping fault at an international event in eight years. This dropped the pair down to the runner-up spot, losing by just 0.1 of a penalty. Not surprisingly, Oliver remains unbelievably proud of Coolio saying: “He’s such a special horse to all of us and drug deeper than ever before this week.”

Oliver also had a catch ride in the CCI3*-L on Ulises, a horse he used to ride before selling him to the States. Tenth after dressage, the pair climbed to seventh after jumping clear inside the time across country. Another clear in the showjumping moved them up again to finish in third place.