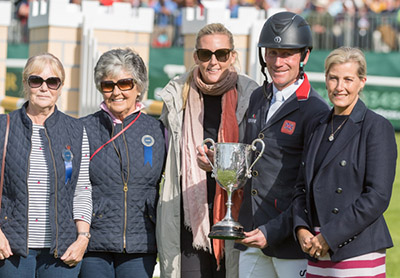 Ballaghmor Class came within half a penalty of regaining the Burghley title he won in 2017.

Second after dressage on a score of 25.3, he made light work of Captain Mark Phillips’s testing cross country track, coming home five seconds over the optimum time – the second fastest round of the day.

The two time penalties did, however, drop Oliver a place to third going in to the final showjumping phase.

The merest touch of the rail at fence two caused it to fall, all the more disappointing given the two riders ahead of Oliver also had a rail down.

Oliver was philosophical, saying at the final press conference: ‘“It’s been a wonderful competition all week. It was a bit of a cheap fence to have if I’m honest as he barely touched it, but Piggy and Pippa have been amazing all week and their horses were just too good.”