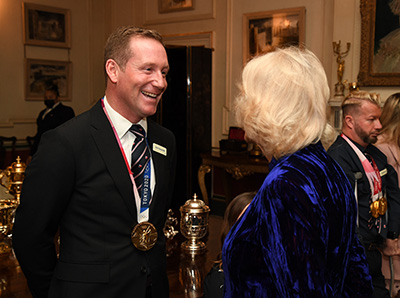 Oliver was among the athletes, owners and support staff who attended a reception at Clarence House last week, hosted by British Equestrian Patron, Her Royal Highness The Duchess of Cornwall to celebrate the successes enjoyed at the Tokyo Games last summer.

In a reception for around 50 attendees in the beautiful principal rooms at Clarence House, The Duchess admired the medals proudly displayed by the eventing team of Oliver Townend MBE, Tom McEwen MBE and Laura Collett MBE and the para dressage squad of Sir Lee Pearson, Natasha Baker OBE, Sophie Wells OBE and individual rider Georgia Wilson. Escorted by Chairman Malcolm Wharton CBE, Chief Executive Jim Eyre and Performance Director Dickie Waygood, Her Royal Highness also took time to talk with a number of horse owners and acknowledged the vital role they play alongside the grooms in the teams’ success. Many of the practitioners and support staff who were in Tokyo attended and had the opportunity to chat with The Duchess about their trip to the Games.

The Duchess addressed the gathering: “I’m so proud to be Patron of such an incredible function of riders, athletes, and everybody who supports them. The owners are so important as, without you, there wouldn’t be any horses.

“I just want to thank all of you who had this brilliant success at Tokyo, it was wonderful to see medal after medal after medal. Watching on television, it just got more and more exciting. I’ve always thought to myself, whenever the Olympics come round, I know the riders are going to be the stars of the show. It’s got better and better over the last 12 years, and I pray that Paris is going to be even better than that.

“I want to thank you all for giving everybody so much pleasure and I’m so deeply proud, and also very envious of everything you do! In the far off days of my youth, I used to dream of winning a medal at the Olympics. Thanks to all of you doing it, I can still dream even if it’s not a reality,” she signed off.