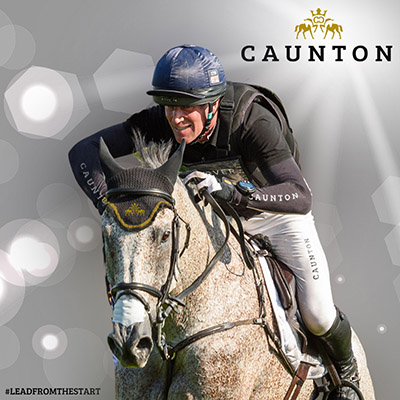 In a collaboration unprecedented in equestrian sport but a regular occurrence in Formula 1 and Premiership football, Caunton Stud is very excited to announce the signing of world number one eventer and 2021 Olympic gold medallist Oliver Townend as its official rider.

The Nottinghamshire stud, home to stallions from top bloodlines and young competition horses, is the brainchild of Victoria Wright and her father, Sir John Peace.

Victoria said: “Oliver is a brilliant horseman with a focus and a drive that keeps him at the top, and one of the hardest working people in the sport. We have huge ambitions for Caunton; our dream is to create something world-class that has never been done before.

“We all share a passion for horse sport, for quality and for success, and a vision for the future of the sport and the way in which we feel it needs to progress.”

Oliver said: “Accepting this contract with Caunton is hugely exciting and I’m delighted to be working with Victoria and Sir John; we have a mutual desire to promote and improve British breeding and the sport of eventing.”

The Townend/Caunton collaboration can first be seen in action on 12 February 2022 at the British Breeding Stallion Event at Arena UK, Lincs, and at the Caunton open day on 27 February, which will feature all the Caunton Stud stallions.