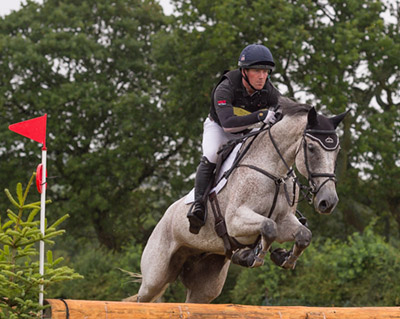 Oliver’s run of form continued at Burgham last weekend. After hot-footing it north from their successes on the Isle of Wight, the team were out in force again.

WEG long-listed Ballaghmor Class took the principal CIC3*, climbing from fifth place after dressage thanks to a perfect clear round in the showjumping and an effortlessly fast cross-country performance for just 1.2 time-faults.

“That showjumping round was possibly the best I have ever done at an event,” said Oliver. “He needed a run to sharpen him up a bit, and the ground was so good that we were able to do exactly what was needed. This was the perfect preparation for whatever the autumn brings.”

Oliver also won the CIC2* on his 25.7 dressage mark with Tregilder, the best win of the eight-year-old’s career to date.

Rapide GII, a horse previously competed by James Sommerville, had a first outing with Oliver and the pair completed on their dressage score, just out of the ribbons in the open intermediate. Also running in this section were Miss Cooley and Tremayle who were both a little careless over the coloured poles.

Cooley Master Class, listed alongside Ballaghmor Class and stablemate Cooley SRS for WEG, jumped a very steady double clear around the CIC2* while MHS King Joules had a gentle spin around the CIC3*.