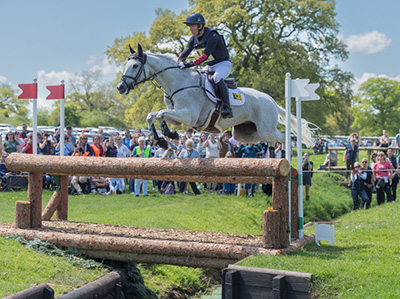 Disappointed with his dressage score on Ballaghmor Class, Oliver bounced back to bring both horses home clear and inside the time across country – despite a near disaster on Swallow Springs as the pair jumped away from the Quarry. A relatively new ride for Oliver, he said at the final press conference: ‘Andrew [Nicholson] did a great job producing Swallow Springs. I’ve ridden several of his horses before and sometimes when you ride an Andrew horse, they make you look like Andrew. I think I’m the new ‘Mr Stickability’!’

As well as his great placings, Oliver also won the William Miflin Memorial Trophy, presented to the rider of the horse with no cross-country jumping penalties and closest to the optimum time. Ballaghmor Class, who Oliver referred to as ‘hugely special’, was three seconds inside the time (Swallow Springs was eight seconds inside). His farrier, Jim Blurton, won the Farriers Prize for his shoeing of Swallow Springs.