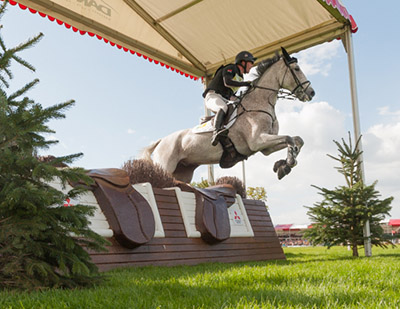 It wasn’t the dream ending to Badminton for Oliver.

On the first day of dressage he and Cillnabradden Evo broke the record for the lowest ever dressage score at the event, posting a 19.7.

By close of play for the two days of dressage, he was the first rider ever to lie in first and second place at this stage of the competition; Ballaghmor Class was on a score of 21.1, more than three penalties ahead of the third placed combination.

There had been doubters in the sport as to whether Cillnabradden Evo would complete the cross country, but Oliver gave him a great ride, adding just time penalties to his score. Later in the day, Ballaghmor Class was pure class, replacing his stable mate at the top of the leaderboard.

One rail down in the influential show jumping phase gave Cillnabradden Evo a final 6th place – an excellent result for the horse. Ballagmor Class had a fence and three seconds in hand, but when a late rail fell and the clock stopped four seconds over the optimum, victory was lost.

Oliver explained” “When he [Ballaghmor Class] hung towards the gate I had to chase him over the planks and that meant I had to strangle him a bit to the double and again to the next upright, which he had down. I ended up adding two more strides overall than I would have liked and that cost me time and, ultimately, the title.”

Second and sixth at the biggest event in the world is an impressive result – but to be so close to a potential second leg of a grand slam and lose it is nothing if not ‘character building’.