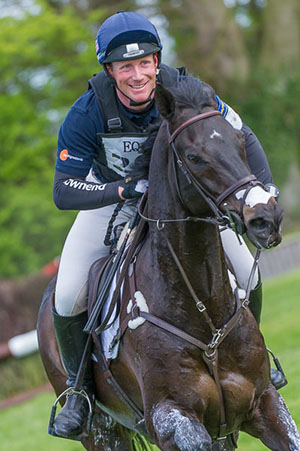 We are thrilled, surprised, speechless…. you name it – but really happy that Oliver and Black Tie have been selected for this summer’s WEG. ‘Tonti’ has been on great form all year, winning the CIC3* at Burnham Market (picture by Trevor Holt, left) and then capping that with his classy performance at Luhmuhlen last weekend – his first 4*.

Tonti is a lovely, lovely horse, and so deserves this, as does his owner Karyn.

“It was a really nice surprise to hear I had been called up for the team. We went to Luhmühlen for his first CCI4* last weekend without any real expectations yet he exceeded anything we could have hoped for him and more [finishing in fourth place].

“I am so pleased for his owner Karyn on his selection as she helps me so much in running my business and keeping everything going for me. I took over the ride from her [Karyn] when she was off with an injury in 2010; we won our first competition together at Aston Le Walls and so she kindly said I should keep on with him. He has just gone from strength to strength with every question I ask of him, we honestly, honestly never expected him to get this far but if I do my job, he does his without any questions asked.

“Karyn bought him eight years ago for next to nothing through an advert in New Zealand, so when he won the CIC3* at Burnham Market this spring we said to ourselves that even if he never does another thing in his life he won’t owe us a thing. He is such a good mate to us, is lovely to have around the place and is never a moment’s bother to anyone.  He has a fantastic brain and is just such a cool little horse, we are incredibly proud of him.

“Last time I went to a WEG I was just a young lad of 23! It is a fantastic competition as you know that everyone there is the best in the world and it will be great to spot some of my equestrian idols again, some that I have followed since I was young.”