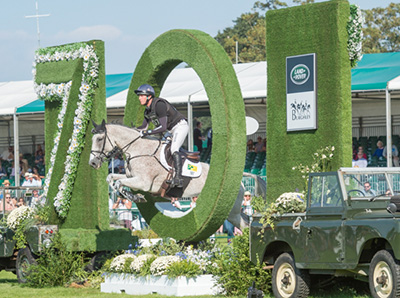 Oliver was delighted with the performance of all three of his rides at Burghley, MHS King Joules, Cooley SRS and defending champion Ballaghmor Class.

Third, seventh and fifth respectively after dressage they all jumped cracking clear rounds across country – MHS King Joules the day’s pathfinder, Ballaghmor Class the last to run and posting the fastest time of the day. Disappointingly, MHS King Joules must have knocked himself on the course and wasn’t 100% on the Sunday morning so the decision was taken to withdraw him before the final horse inspection.

With a pole down apiece, Ballaghmor Class finished runner up and Cooley SRS was 12th – a fantastic result.

Oliver said: “I’m just as proud of Ballaghmor Class as I was last year – I never thought he’d get the time across country as the terrain is so testing, but he dug really deep for me. It’s all about consistency, he’s still only 11 and I’ve been telling people for years how good he is. He’s proved that again today. For me, he turned into a professional this week whereas last year he won out of naivety.

“Cooley SRS also rose to the challenge and I couldn’t be happier with how he performed here.”