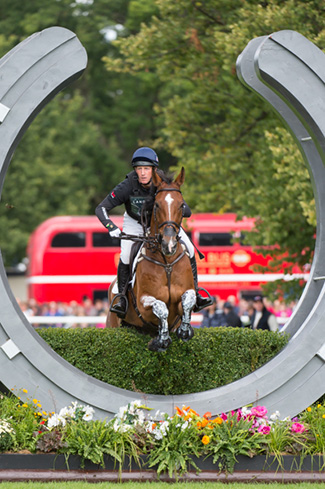 Samuel Thomas is obviously very inexperienced. He lay in 53rd place after dressage on a score of 54.2 and picked up 20 penalties at Capabilities Cutting across country. This still moved him up to 37th place, and with just one rail down on the final day he finished in 32nd.

Armada performed a great test, scoring 38.7 to lie in equal 5th going in to cross country. Last to go around Captain Mark Phillips’ massive track a clear round would have given them the overnight lead – guttingly Armada ducked out at the skinny brush at the exit to the Trout Hatchery. Even with time wasted here, he was only three seconds over the optimum time. The final phase is always his nemesis, and this year was no exception; four rails down gave him a final placing of 23rd.

Whilst Armada was last to run, Dromgurrihy Blue had been cross country day’s pathfinder. Twenty fourth after dressage with 45.8, he put in a really solid jumping performance to add 5.6 time penalties and climb up to 9th going in to the final day. Two rails down gave him a finishing place of 11th.