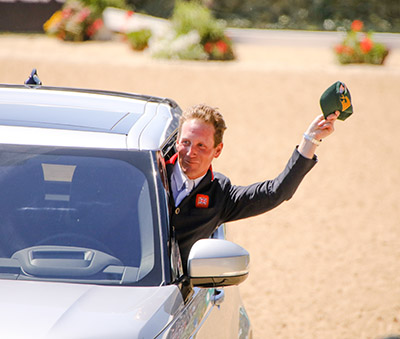 Oliver and Cooley Master Class are the winners of the 2018 Land Rover Kentucky CCI4* – leg 2 of a possible Grand Slam.

Going in to Sunday’s showjumping, Oliver held 3rd and =4th place. Less than a rail separated the top 5 horses.

Jumping out of turn, MHS King Joules tapped a rail to add 4 penalties to his score – he finished in 7th place. There was no such mistake on Cooley Master Class. In front of 25,000 spectators (not counting everyone watching the live stream), Oliver produced a foot perfect clear – leaving no room for error by Chris Burton in 2nd, and the overnight leader Michael Jung.

Two rails fell for the former, and one for the latter.

After a hugely testing spring – described by Oliver as ‘the crappest ever, I’ve been cold and wet for four months,’ and Cooley Master Class having only had two open intermediate runs this year, Oliver has set himself up for a crack at the Rolex Grand Slam later this week.