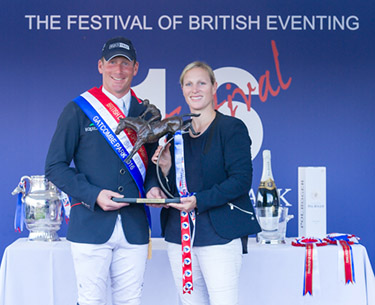 It was a hugely successful weekend for Oliver at Gatcombe. Not only did he finish 1st, 2nd and 4th in the Advanced section, he was also runner up in the British Intermediate Championships and winner of the Open, making him British National Champion.

Cillnabradden Evo partnered Oliver to the Open title. After jumping one of just four show jumping clears, and his nearest rivals faulting across country, Oliver had a good cushion for time penalties.

“Gatcombe is a very special place to me, so this win means a lot,” said Oliver. “We know that the horse hasn’t got great speed over distance and, although he’s very genuine, he can do the odd thick thing, so I was just trying to conserve his energy and get him home safely. I honestly thought the win had gone.” In fact he won by over six penalties, becoming the first British rider to win a leg of the Event Rider Masters series in the process.

Dunbeau took the top spot in the Advanced, in the main thanks to a 25.7 dressage score. He beat stable mate Samuel Thomas II with Dromgurrihy Blue slotting in to 4th place.

A rail down cost Master Trump the intermediate title; he was beaten in to second place by less than one penalty despite jumping the fastest round of the day.

Oliver is one of Gatcombe’s most successful riders; he won the National title in 2013, and has also won the Intermediate title three times and the Novice title four times.