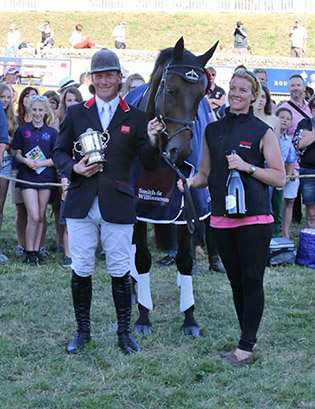 It’s no wonder that the Festival is one of Oliver’s favourite events. Prior to this year he had six titles on his record (see the Stats page); he now has eight.

Note Worthy trounced the opposition in the Smith & Williamson Intermediate Championships, finishing 12 points clear of the field having added just 1.2 cross country time penalties (fastest round of the day) to his leading dressage score of 23.3.

Power Drive also put in a solid performance; adding a rail down and six time penalties to a dressage score of 27.2 for 5th place.

With Mr Hiho and Armada 2nd and 3rd after the dressage in the Open, it looked like Oliver might make it a clean sweep. Mr Hiho was never due to go across country so it all rested on Armada. Unfortunately his show jumping was how it can be sometimes… four rails came down.

He redeemed himself with a fabulous cross country clear inside the time (the only horse to do so) and finished in 4th place… but had only 2 poles fallen, the title would have been his.