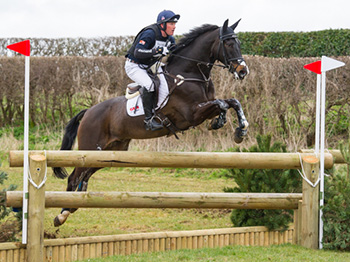 Oliver was undoubtedly the man to beat at Burnham Market, and few people succeeded. On day three of the event he won the CIC3* on new ride, Patsy Mason’s Mr Hiho, and took the runner up spot on last year’s winner Paul Ridgeon’s Armada. Both horses jumped double clears, Mr Hiho having the dressage advantage but Armada faster around the cross country track, leaving the two horses just 0.2 of a penalty apart.

Earlier in the day Oliver had also won the CIC2* aboard Angela Hislop’s Cooley SRS and finished second with Andrew Cawthray’s Colonel Joe. The two horses completed on their dressage scores – the only two to make the cross country optimum time in the 2*.

There was another 1-2 a day earlier in Intermediate J. Red Andes Fanfare narrowly beat stablemate Peruising, Power Drive taking the runner up spot in another intermediate section and Silken Scully a fourth place.

The final rosette of the event went to Kanga Rouge, whose dressage score completion put him third in a novice.