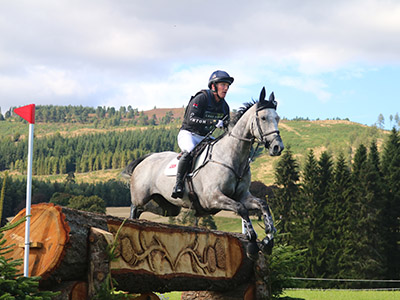 Oliver was far and away the busiest rider at Blair last week, with nine rides across the classes.

In the 4*L Cooley Rosalent led the dressage (her first run at the level). She was incredibly unlucky to trigger a MIM clip on the cross country, the resulting 11 penalties dropping her to second place, but she finished her event with the only penalty-free showjumping round, retaining her position.

Oliver had five in the 4*S. At the end of dressage, Ballaghmor Class led the field, with Tregilder fifth, Swallow Springs sixth, As Is eighth and Crazy du Loir ninth. Swallow Springs and Tregilder were withdrawn after showjumping, both having jumped clear – they are running at Burghley later this week.

As Is was the only horse to finish inside the cross-country optimum time, moving up to eventual second place. With the fast-approaching World Championships, Oliver ran Ballaghmor Class steadily around the track for a relaxed prep-run.

Oliver struck more bad luck in the 3*L when Cooley and Co also triggered a MIM clip, having posted a good sub-30 dressage and going on to show jump clear. That put paid to their chances of a good placing.

In the 2*L Butts Leia finished on her dressage score in eighth place, but Dolmen Debenture missed out on a second place with another triggered MIM clip. Bar those 11 penalties, he jumped a double clear.

Very much a week of mixed fortunes, but Oliver was delighted with all of his horses saying: “The great thing about Blair is that you leave knowing what type of horse you’ve got.”