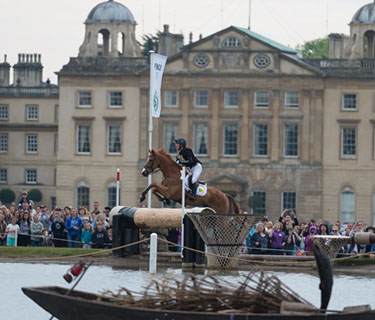 It was a very mixed week for Oliver. Black Tie pulled out all the stops in the dressage to score 40.7 and lie in 8th place overnight, but despite jumping clear across country up as far as Alexanders Silver Birch, fence 28, almost on the home run, Oliver pulled up as ‘Tonti’ was tiring.

Armada, the pathfinder yet again at Badminton, was deemed by many to have been harshly marked in the dressage. His score of 46.2 put the pair in =24th at the end of the first phase.

In true Armada style, he added nothing to that score on cross country day – although Oliver revealed that he had had to work harder than previously and that it would be the 17-year-old gelding’s last appearance at a CCI4*. On Saturday night they had climbed up the leaderboard to 8th place.

Unfortunately, also in typical Armada style, he showed little respect for the coloured poles and descended back down to 25th place. As a disappointed but resigned Oliver told the media after his round, “I hope everyone remembers him for his cross country rounds here; five clears, four of them inside the time.” [The time penalties were in 2014, the year they finished runners up]